I am attending a few gamedev and non-gamedev events this month and I decided to make and hand a different business card this year. After attending BIG Festival in São Paulo/Brazil and meeting some great people and games this week, I thought it would be cool to write a ‘making of’ of my business card, due to the positive feedback I received from people during the event.

This is an unusual topic for me to write because, heck, I am not even a graphic designer or illustrator, what could one learn from it? Hopefully, something

First of all, the finished business card:

From the pictures above, you can notice that the business card is not ‘the regular one’. While I do have a formal business card that I have been using for some time, this one is actually a mini zine disguised as business card. For those unfamiliar with the term ‘zine’:

“A zine is a handmade magazine or mini-comic about anything you can imagine: favorite bands, personal stories, subcultures, or collections.”

Taken from the book “Whatcha Mean, What’s a Zine?” by Mark Todd and Esther Pearl Watson.

Having a career as software engineer/game programmer and teaching related subjects as a professor, I get the impression that people tend to forget that I can really enjoy arts and handcraft stuff 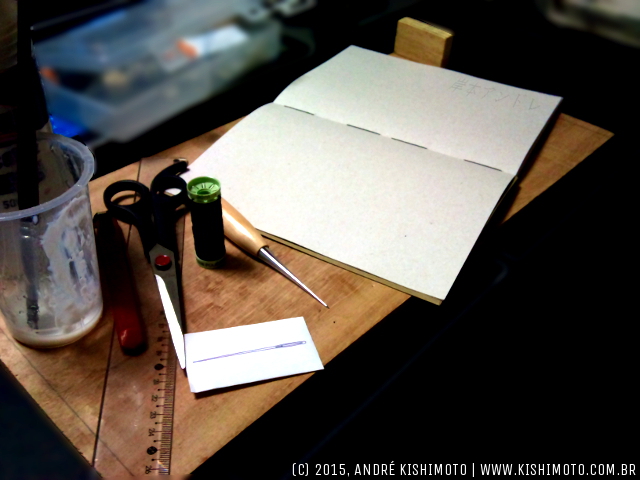 Giving digital a break (one of my first attempts to bind a sketchbook).

So, yeah, I like technology and tech stuff but the right side of my brain also wants to be fed from time to time. And usually it does not want to consume manga stuff. I know there are plenty of great stuff in that genre and I like some dozen works, but even though I am a Brazilian born Japanese and have the same surname as Naruto’s creator, the art style (and storytelling) that I like the most are very different.

If I had to pick up a couple of publishers so you can have an idea of what I like and read, I would definitely say Drawn & Quarterly and Fantagraphics. But I would also have to say that there are many zines of known and not-so-known artists, many found via graphic novel anthologies, Etsy, Storenvy, Carbon Made and so on. Some zines from my collection.

Most zines I have uses staples to attach the pages together, but ‘Chicago’ from my friend Batha (see picture above) was the first one that I saw that uses one sheet and one cut to create an 8-page zine, which is the method I chose for my business card.

I already had an idea in my mind of what I would like to include in the mini zine but I sketched the thumbnails so I could visualize it on paper. In doing so, I noticed that the page where I mention my personal games would be better to appear before my company, so the last thing the reader would see inside the zine would be my company info. Not only that, but the page spread would make more sense. 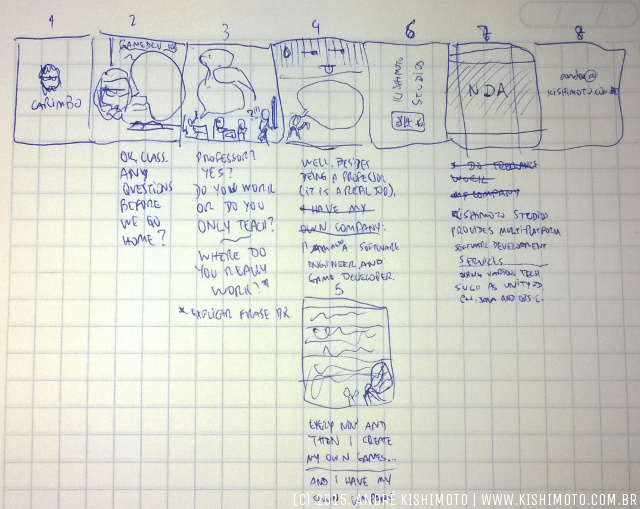 Thumbnails for the mini zine.

I also numbered the thumbnails so it would guide me by the time I would draw the pages.

The drawings were made on one A4 75 gsm sheet, folded and cut as an 8-page mini zine. 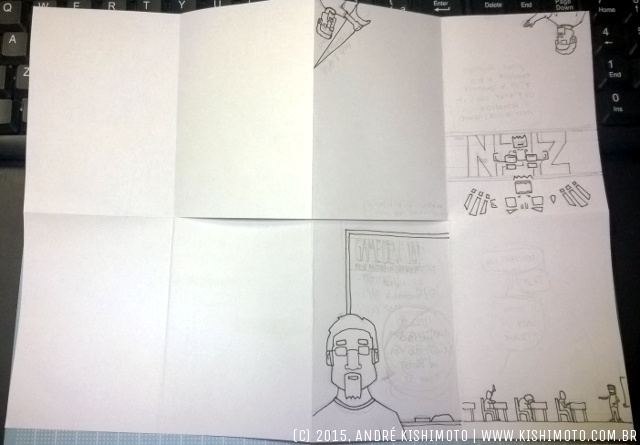 Drawing only the pages that would have drawings.

In this first pass, I only drew pages 2 to 5, since page 1 would be filled with a stamp, page 6 with my company logo, page 7 with a blurred image and page 8 with my website URL.

Drawing was done using a 2B pencil and final artwork using Micron 01. After that I scanned the page and brought the image into Gimp.

Side note: I always use the following scratch paper that I numbered some time ago as a reference when I create 8-page mini zines. 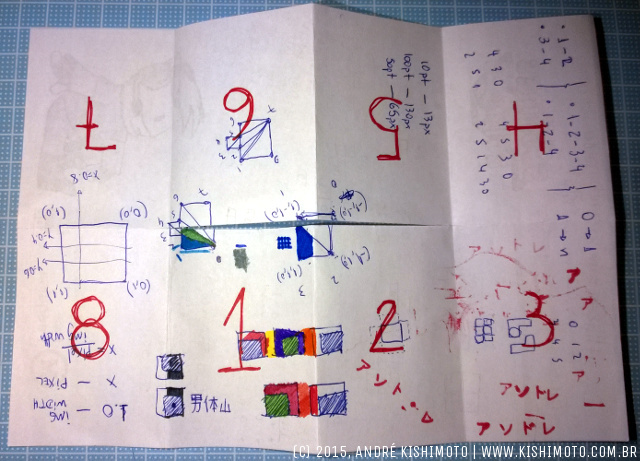 After checking the scanned image in Gimp, I redrew myself for page 3 since I did not like the first drawing, wrote the details that would go in the whiteboard in page 2 and lettered ‘NDA’ to put in page 7. 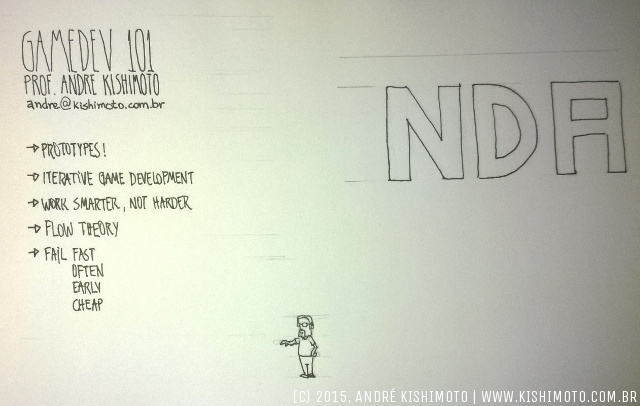 With everything in digital form, I started making the final composition in Gimp, scaling down the drawings, repositioning and rotating elements, and so on. The idea was that the mini zine would be printed in A5 instead of A4 size.

I painted all strips with a light grey and added white to places that should be highlighted. The only exception was the first strip from page 4, which has a gradient background and some vertical lines, using some manga language.

In the first version of the card I added black lines like most comic strips but removed them during the printing process, as they were not matching the paper folds (something I have to work for the next batch of cards). 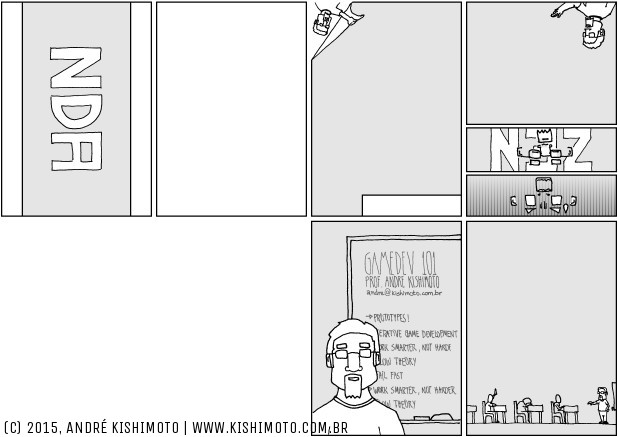 First version of the mini zine: only drawings, light grey/white and black lines.

Then I added texts above white rectangles with rounded corners, some game screenshots, my company logo and a QR code (created using http://goqr.me). Some parts near the borders were cut/scale down after print tests. 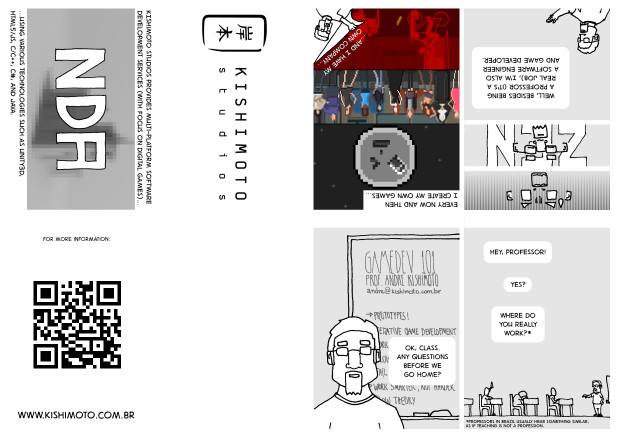 Final version of the mini zine.

After the mini zine was digitally done, the next step was to print it in A4 paper, cut in half (each A4 paper resulted in two copies of the mini zine), and fold and cut each half to assemble the mini zine. 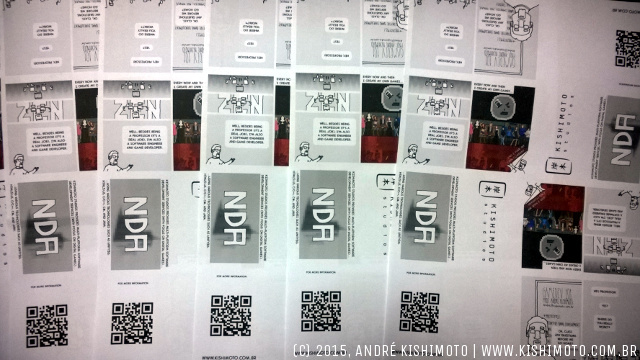 The final step was to stamp the cover of each copy with a rubber stamp I created some time ago. 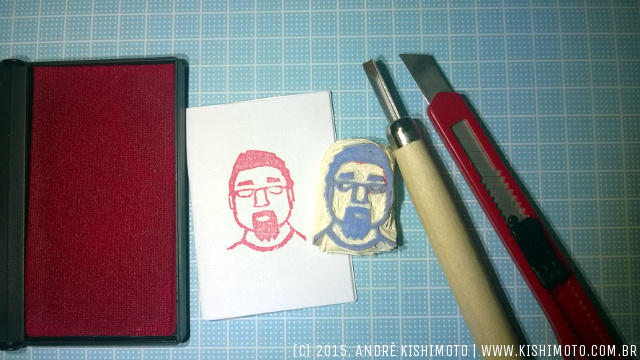 Rubber stamp and tools I used to create it.

Rubber stamping was another source of inspiration. Unfortunately, rubber stamping is too boring in Brazil (or I might not be looking at the right places); the only ones that I see are those ‘date’, ‘paid’, office stamps or birthday, kids and ‘grandma’ stamps that lack personality. Nothing compared to Japan, where you can find really cool rubber stamps everywhere (really, everywhere).

Side note: if you ever go to Japan, you can create your own ‘Collect rubber stamps’ side-quest! 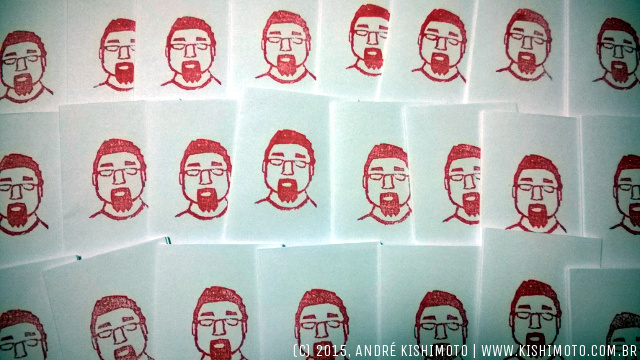 Me me me. All mini zines with stamped cover. 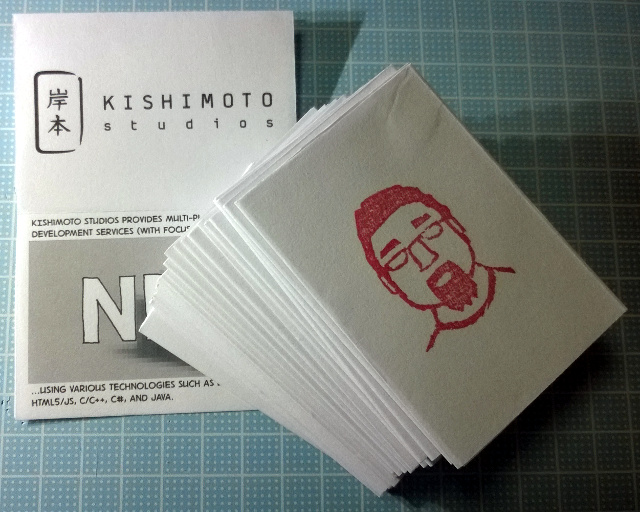 Handcraft and its imperfections.

It was very fun to create this mini zine business card. A few times I thought that it could be somewhat risky to use it, since it is more informal and handmade (hence it has lots of imperfections).

At least in the first event I used it, people seemed to like it and did not mind the imperfections. Most of them told me ‘it is cool!’, ‘might be hand-made but easily remembered’, and ‘very creative!’, so I think for some events I might use it instead of my ‘regular’ business card.

If you know other people/companies that have similar business cards or that do not follow ‘standard business cards’, please share in the comments below! I googled to check if there were other examples and could only find Will Blanton’s.

Thank you for reading everything and I hope you enjoyed it!

PS: Maybe next year I will have an smartphone app disguised as business card or start handing out floppy disks with my info inside. Who knows

“A functional prototype is worth a thousand GDD words.”
- André Kishimoto, 2014

Picture of a sticky note on my monitor.
(It used to be ‘pages’ instead of ‘words’, but I noticed that a thousand pages is just absurd — even thought there are GDD with 1000+ pages…) 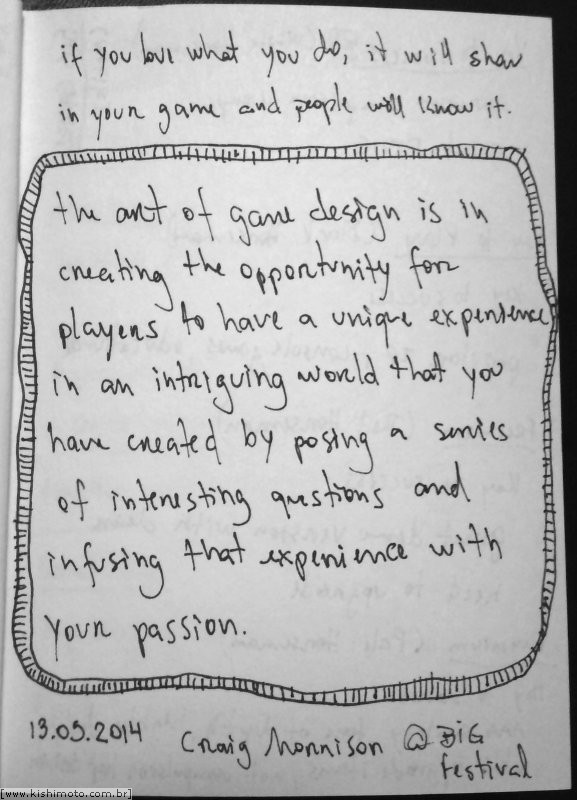 According to the definition of DRM on Wikipedia, Digital Rights Management (DRM) is a class of technologies that are used by hardware manufacturers, publishers, copyright holders, and individuals with the intent to control the use of digital content and devices after sale.

However, Packt Publishing firmly believes that you should be able to read and interact with your content when you want, where you want, and how you want – to that end they have been advocates of DRM-free content since their very first eBook was published back in 2004.

To show their continuing support for Day Against DRM, Packt Publishing is offering all its DRM-free content at $10 for 24 hours only on May 6th – that’s all 2000+ eBooks and Videos. Check it out at: http://bit.ly/1q6bpha.

Packt Publishing celebrates their 2000th title with an exclusive offer – We’ve got IT covered!

Known for their extensive range of pragmatic IT ebooks, Packt Publishing are celebrating their 2000th book title `Learning Dart’– they want their customers to celebrate too.

To mark this milestone Packt Publishing will launch a ‘Buy One Get One Free’ offer across all eBooks on March 18th – for a limited period only.

Packt is one of the most prolific and fast-growing tech book publishers in the world. Originally focused on open source software, Packt contributes back into the community paying a royalty on relevant books directly to open source projects. These projects have received over $400,000 as part of Packt’s Open Source Royalty Scheme to date.

Their books focus on practicality, recognising that readers are ultimately concerned with getting the job done. Packt’s digitally-focused business model allows them to quickly publish up-to-date books in very specific areas across a range of key categories – web development, game development, big data, application development, and more. Their commitment to providing a comprehensive range of titles has seen Packt publish 1054% more titles in 2013 than in 2006.

Here are some of the best titles across Packt’s main categories – but Buy One, Get One Free will apply across all 2000 titles:
Web Development
Big Data & Cloud
Game Development
App Development 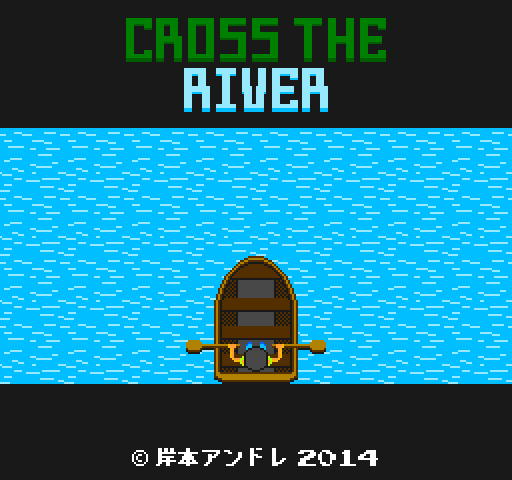 Can you help the young boy cross the river with his pets, safe and sound?
That should be easy, but he can only take one pet at a time with him. And,
unfortunately, the dog and the cat do not get along. The same is true for
the cat and the parrot.

What steps will you take?

Find out the answer in this 'river crossing puzzle' based mini-game! 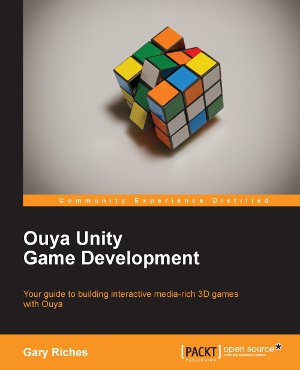 Link para a página do livro no site da editora. 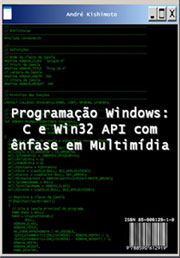